Stay up-to-date with everything new at Shivtr!

Patch Notes · Aug 08, 2008
The progressions update is now live, adding another section to your guild site and a new block.

Progressions track the progress your guild has made towards a goal. With this update we support two types of progressions: checklists and amounts. 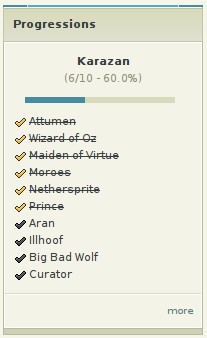 The checklist option allows you to specify a number of steps, and check off the ones which are complete. An example use of this type of progression would be to track your progress through a dungeon, checking off which bosses you have killed. 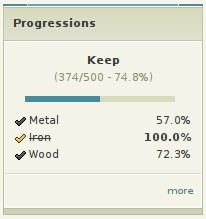 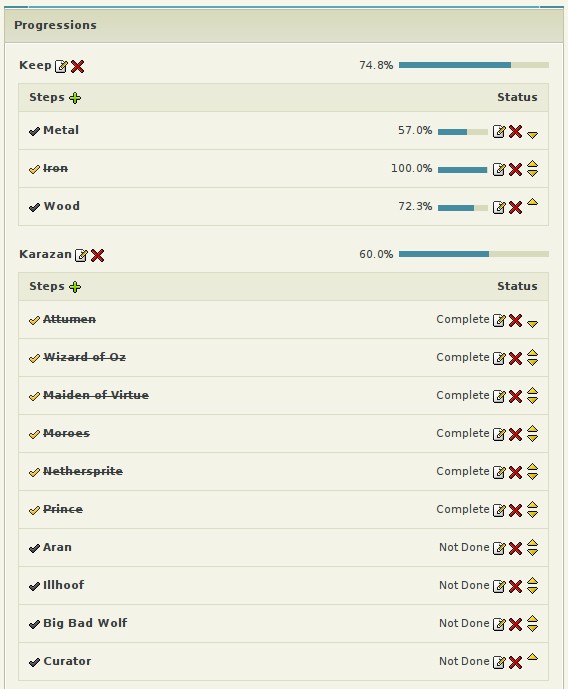 A progressions page has also been added to your guild site, at http://yoursite.mmoguildsites.net/progressions. It is more meant as a place to manage your progressions, with the idea progressions would mostly be shown via the blocks, but it can serve as a history or way to view progressions for your guild also.

Whats Next?
We will be doing a round of general polish to the website, working on several enhancements we have in our issue tracker, such as the "Mass Add" feature for DKP and improvements to the admin panel. Then we will be working on our item tooltips update, improving them for WoW and expanding them to work with other games.

Bunnytrap · 12 years ago
How do you edit the progressions page? When I click the drop down menu, nothing pops up.
0 Likes 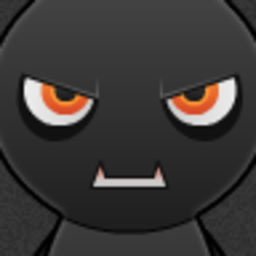 Staff
8 Toes · 12 years ago
You must create progressions on your site first, and then choose which one to display in the block.

I have updated the block options to not show the empty dropdown if you have no progressions, and instead show an error message with a link to your progressions section, which should make this clearer =)
0 Likes

Conny · 12 years ago
This is a nice addition. We do not need it for progression as we like our visualisation of it, but in case we need to collect ressources for something, this makes a nice tool.
It will add something nice to guilds who do not have a progressions-block yet.

Thanks for your work.
0 Likes

Jurisdictio · 12 years ago
Very nice addition but I keep getting an error message in the block - "Error: The progression could not be found to display" - even though I've entered progressions on the appropriate page. Any suggestions?
0 Likes

Jomondo · 12 years ago
Progressions is a great idea thanks. But my side blocks are getting to be a lot, is there a plan to make that block available for the center?
0 Likes

Another feature we want to add is a home page block that contains side blocks, so you can add a home page block called "dual" or so, and then select two of the side blocks to embed in it, which would then be shown side by side on your home page; when we add that we will likely remove all the pre-created dual blocks we made, and convert them to this system.

Both of those features maybe a few updates away still, but will be coming to the site in the future =)
0 Likes

Jomondo · 12 years ago
Awesome news about the blocks, thanks :)
0 Likes

Kalborn · 12 years ago
This is a great addition, but can only be used by the guild admins, I'd rather give all of my guild members the ability to put their own personal progressions on the site so other guild members can view them and offer help (on quests, or leveling, etc...) Can this get an update where Moderator/Trusted user/User get a check box on the permissions page to allow that rights level to edit progressions?

We have a permissions update planned that will be coming fairly soon now, where we will be allowing you to create your own Roles (rather then the ones we defaulted for you - Guest, User, Trusted User, Moderator, Admin, Super Admin).

With that update, we will be setting all possible permissions as check boxes you can assign to a role; so it will provide much more freedom to who can do what on your site; when that update goes live you will be able to allow progressions to be for a role and assign that role to all users on your site =)

For what you described however, perhaps we can add a new type to progressions, choosing whether the progression is for a member or a guild, and progressions for a member would be listed as a tab under their profile; I made a note in our issue tracker for this to look into it for a future update =)

Kalborn · 12 years ago
Sweet, thanks and keep up the good work!
0 Likes

Fusion · 2 years ago
I know this is super necro-ed, but we recently just moved our guild over from enjin to shivtr. You guys have a great website building service, however I was wondering if we could have a little more details to our progression bar as that is one of the main things a progression guild uses. If possible could you add: Pictures for the raid: separate horizontally story/hard/nightmare (those are SWTOR difficulties im not sure what the WoW ones are); add the option for additional teams (we currently have 2). with the latter of the two we could expand ours additionally by writing in bosses rather than just having overall % completeness per team. Thanks
0 Likes

boomitis · 9 months ago
this is horrible!!!
0 Likes

boomitis · 9 months ago
cant even make any progression automated on this site, best to go back to other site, that site actually worked.
0 Likes

If you were logged in you could add your comments to the discussion!