Raids are where all the action happens in your DKP section. You create raids to track bosses killed and items dropped, along with raider attendance and points.

Creating a Raid
To create a Raid, go to your DKP section then click on the Dungeon you want to add a raid to. Then click the "Add Raid" button at the top right to begin adding your new raid. You will first be prompted for some basic info about the raid: 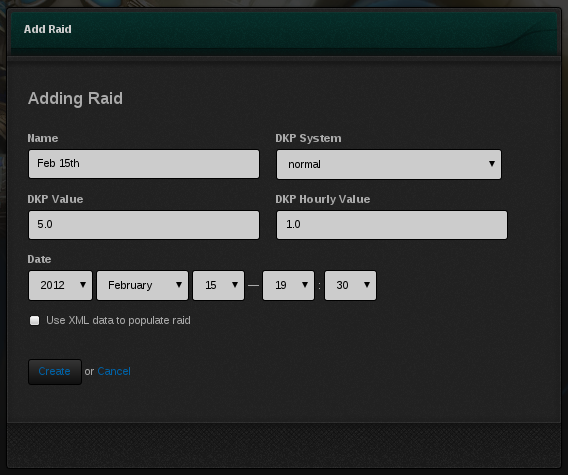 Upon submitting this form, your raid will be created and you will be taken to the next step where you can begin populating your raid with data: 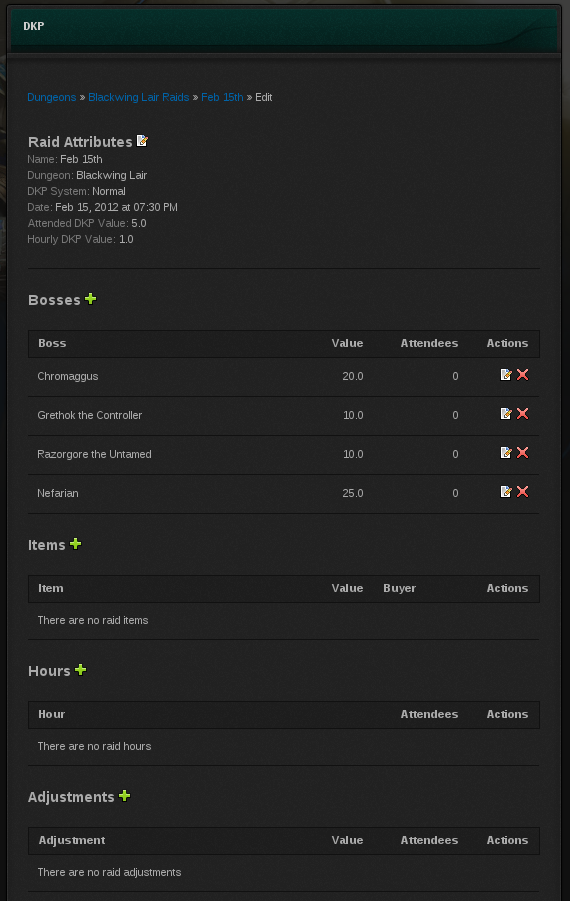 Your raid will be pre-populated with the values from your Dungeon (including the Bosses you have setup there) to help make things quicker for you, but can be entirely customized from this form.

Bosses
A boss is anything on the raid that is either worth points or can drop items. This will typically be a boss mob you kill on the raid, such as a dragon.

Items
An item is anything on the raid that costs points to receive, usually some legendary item.

Adjustments
You can reward bonuses or deductions to raiders using Adjustments. This can be used for example to give a bonus to players who show up on time, and deductions for those who are late.

XML Upload with WoW Addons
Along with manually creating raids, for games that support in-game addons such as World of Warcraft, the DKP section can be mostly automated. When you create a new raid, there is a check box for "Use XML data to populate raid", which will show a textarea for you to copy and paste XML into. If you use an in-game addon such as Headcount2, CT_RaidTracker or ML_RaidTracker, it can track your boss kills, items and hours for you and export them to an XML string, which you can then upload with your raid. This will then populate all of the bosses, items, hours, adjustments and raiders found within the XML for you.

The formats supported by our XML upload is quite flexible, and XML formatted for EQDKP, MLDKP and others should work. If you try and upload some XML which does not work, please let us know with a quick email, and if you could include a sample of the XML you tried to upload that would be awesome. =)