An important feature for any guilds calendar is to allow members to signup to events! To state your event should allow signups, simply check the Signups? checkbox when creating your event. Once you do, you can also edit the signup options: 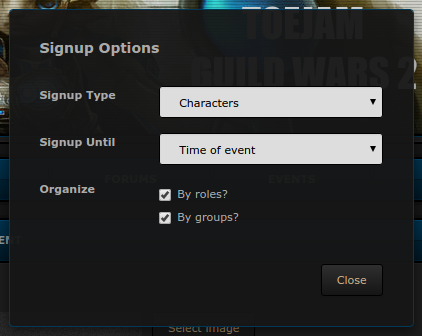 Signup Type
This states whether users can signup to the event as a member, or with one of their characters. If characters are enabled, the user will be able to select which character they are bringing, and if enabled, which role they will be fulfilling.

Signup Until
This feature allows you to set when event signups close. You can use this if you wish to prevent last minute signups, or have a reason to prevent signups after a certain time.

Roles
Roles allow a user to state which role they will be fulfilling with the character they are bringing. The available roles are Tank, Support and Damage. Only available with Character signups.

Groups
Groups allow the event participants to be organized into groups. For example, say the event is for a 10-man dungeon run and you have 30 people signup. With this feature enabled, you can then organize the participants into three 10-man groups. Only available with Character signups.